DESCRIPTION: The “LabTek” experimental unit is designed to clearly demonstrate the effect of the Coriolis force in a rotating reference system. A transparent water tank with submersible pump is placed on a rotatable arm and then rotated. Within the rotating reference system, the pump produces a water jet in a radial direction. Depending on the flow rate of the pump or the water velocity, as well as speed and direction of rotation, the water jet is visibly deflected due to the Coriolis force. The degree of deflection can be determined by means of a scale on the water tank. The speed is continuously adjustable, electronically controlled and digitally displayed.

When a mass moves relative to the reference system within a rotating reference system, this movement is deflected. This deflection is caused by the Coriolis force, an apparent or inertial force. The Coriolis force plays a crucial role in meteorology and physical oceanography, since it influences the course of air and water currents due to the Earth’s rotation.

In engineering, the Coriolis force occurs when a rotational motion interferes with a further movement of the same object. This can occur for example in cranes, gearboxes or robots. 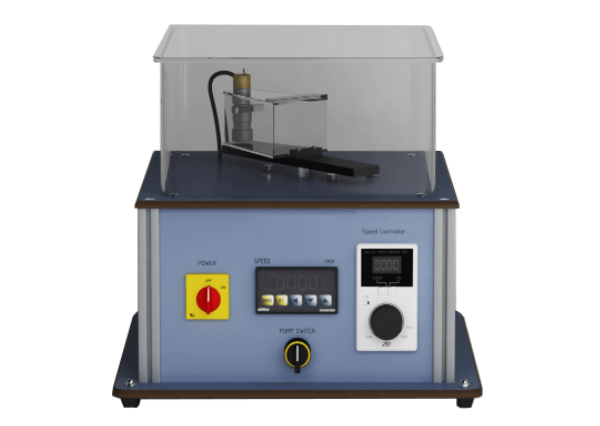